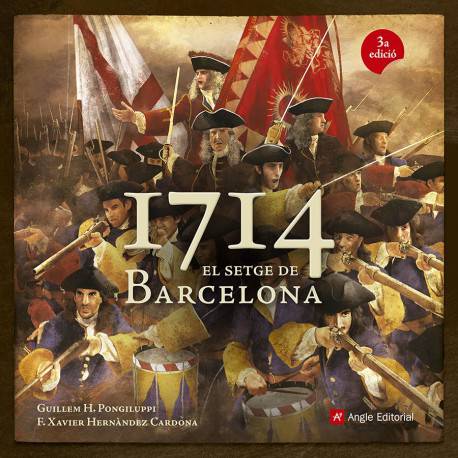 11th of September 1714 in Barcelona, as never seen before.

A magnificent illustrated book with an extraordinary visual reconstruction of the war that marked the destiny of Catalonia.

Successió War faced those countries that, after Charles II death, accepted Philip d'Anjou as king of Spain and those who wanted to do was the archiduke Charles, including Catalonia, Portugal, Austria and Great Britain.

Between 1702 and 1714, Catalonia defended their traditional political freedoms and an understanding of the government more open and advanced, as befits a country that was modernized; and opposed the absolutist Bourbon monarchy, which maintained the privileges of the nobility and the church held back the development of the productive forces. For reasons of international strategy, the various allied countries leave weapons and Catalonia is left alone from 1712 in defending their rights. The superiority of the Bourbon army besieges Barcelona and the book shows how, in a short time, the Catalans organized a special army that is able to heroically defend every inch of the territory.

The magnificent illustrations by William H. Pongiluppi show in great detail the organization and funding of armies, war tactics of the moment and the development of the siege until the final capitulation of Barcelona. It was three in the afternoon of 11th September 1714.

Guillem H. Pongiluppi
Illustrator. He has been a pioneer in digital art in Catalonia. He cultivated drawing fiction significant awards until Exposé 2011 book appeared showing the best world digital art. He excelled at drawing history.

Francesc Xavier Hernàndez Cardona
Historian and professor of Didàctica de les Ciències Socials at the Universitat de Barcelona. He has coordinated historical and archaeological investigations about the Successió War and the Spanish Civil War. Author of numerous works of military history.