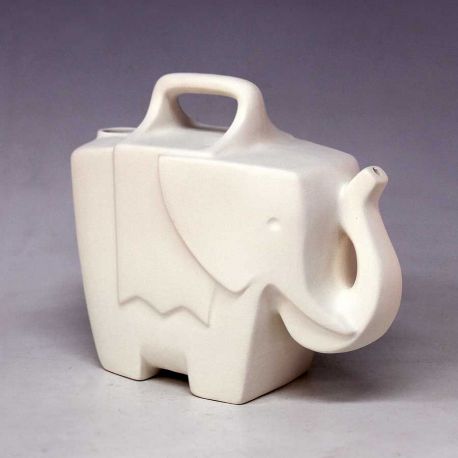 The càntir Elefas 2021 of the 71 Festa del Càntir d'Argentona is a jug of the prestigious designer Oscar Tusquets Blanca, one of the references of the design of our land.

Handcrafted of glazed pisa ceramics. Each jug is delivered with its individual personalized box with the original sketch of the jug made by Tusquets himself.

This year's jug, called “Elefas”, wants to be, according to the designer, “a poetic memory that generates sympathy. Designing an object that has thousands of years of tradition, and that is not a mere reproduction, is attractive but difficult. Driven by my figurative passion, I thought about being inspired by an animal. In the excellent Museum of Argentona I saw birds, bulls, dogs and fish; ancient or Picasso. Nobody had thought of an elephant, although, once designed, the people in charge of the Museum warn me that they keep one in the warehouse".

This year the jug has been designed by Oscar Tusquets Blanca, an architect by training, a designer by adaptation, a painter by vocation and a writer by desire to win friends. Oscar Tusquets Blanca is the prototype of the integral artist.
Born in Barcelona in 1941, he graduated as an architect from the Escola Tècnica Superior d'Arquitectura de Barcelona. Significant works are the expansion and remodeling of the Palau de la Música in Barcelona, the Alfredo Kraus Auditorium in Las Palmas de Gran Canaria and the Toledo Metropolitan Station of Napoli.

He has collaborated with prestigious Spanish, German and Italian production companies. Some of his pieces are part of the collections of important museums such as the Moma in New York or the George Pompidou in Paris. Among other distinctions he has received the Gold Medal al Mèrit en les Belles Arts, the Premi Nacional de Disseny and the Palme de Chevalier de l'Ordre des Arts et des Lettres.